Earlier in October I was an extra for the new Microsoft Lumia promo video featuring the amazing Prides. The shoot was in a pretty cool live music venue in South London.

Upon arrival I met some other extras and it turned out not all of them were fans and some of them didn’t know what band was shooting today. So I made it my mission to properly introduce them to the lovely Glaswegian Prides.

Let’s just say, I did pretty well and to be honest it doesn’t take a lot of convincing that Prides are just absolutely brilliant.

At some point the band arrived and made their way inside, however not for too long, as Stewart, Callum and Lewis came back outside again and got chatting to the fans and extras that had gathered for the shoot.

Shortly after I had my hair and makeup done and got changed into my leather jacket now looked pretty rock ‘n’ roll, we got called inside the venue and gathered around the stage as filming was about to begin.

We filmed a few scenes and it was actually quite fun. Between changing camera settings or camera angles Prides fooled around on stage which was very much to the liking of everyone on set. 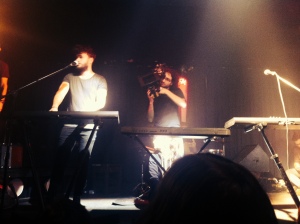 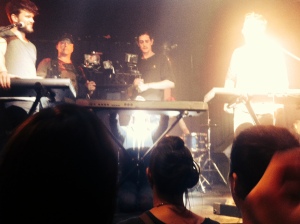 After about three hours of shooting it was time for the last shot of the day and everyone was happy that it was done.

Before heading back home I managed to catch Stewart, Callum and Lewis for a cheeky photo – Fangirl success!

I have to say, they were really lovely and despite having been filming half the day, they gave me a few minutes of their precious time and we got chatting about how far they have come. I felt like a proud auntie again, telling them that I was bursting with Pride 😉 as they opened up for Blink 182 at the O2 Academy Brixton in August, after I had first seen them earlier this year play ‘The Social’ at Oxford Street.

They were pretty chuffed to hear that.

Obviously, all good things have to come to an end and they had to head off and so was I.

It has been an incredible experience and it was such an honour to meet you guys.

5 Replies to “Video shoot with Prides”