Last night was probably one of the best concerts I’ve ever been to.

It’s been a long time coming for Lonely The Brave to go out there and perform their brilliant music on their own headline tour, having been amazing support to the likes of Marmozets on their ‘Big Cheese Tour‘ and Lower Than Atlantis back in 2014.

The London gig was finally round the corner and the ‘Student Central’ began to fill with music lovers and fans of Lonely The Brave.

As it was their own headline show, this time support came from two brilliant acts, better known as the gorgeous singer/songwriter Hannah Lou Clark and the great guys off The Xcerts. Both acts had the crowds full attention and made sure everyone is hyped up for Lonely The Brave.

It was about 9:30pm when the lights went off and the intro started to play and the anticipation was almost unbearable.

Having scored a place in the second row and being on the taller end of mankind, I had the perfect view of the stage.

Suddenly the guys entered the stage from the left, with drummer Gavin Edgeley leading his band. There couldn’t have been a better start to the show than with kicking off with ‘Victory Line’ – one of my absolute favourite songs.

Guitarist Mark Trotter shouting a very enthusiastic ‘LONDON!’ into his mic and instantly received a roaring response from the gathered fans.

Without further ado, Lonely The Brave went straight into ‘Trick Of The Light’ and ‘King Of The Mountain’. The crowd went absolutely mad for it, there was some serious pogo action and some moshing going on in the front of the stage.

The energy in the room was at next level, the fans and the band were giving it their all and both sides were simply lost in music. 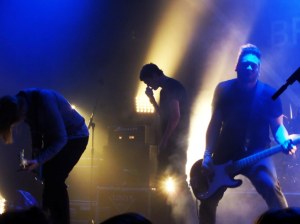 Lonely The Brave is one of those bands that make sure you not just watch the show but you actually get on that rollercoaster and experience it all. Their performance is always so powerful and so emotional at the same time, thanks to the amazing vocals by singer David Jakes. His voice is without doubt one of a kind.

It is beautiful to see that David puts all the emotions that some other performers are sadly missing, into the songs. You don’t get that often these days. So we better cherish David Jakes work.

The set went on with the well loved tracks, ‘Dinosaurs’ and ‘Black Saucers’ from Lonely The Brave’s debut album ‘This Is War’. Next up was ‘Deserter’ which guitarist Mark Trotter dedicated to the amazing London crowd. 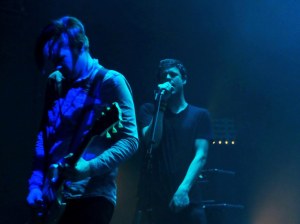 As the band has been teasing their fans over various social media platforms about new tracks lately, the time had finally come as a new song ‘Control’ filled the London Student Central. Judging from this performance, the new material will blow everyone away and will do Lonely The Braves amazing success justice.

Following the new song a fan favourite was played. ‘The Blue, The Green’ is such a powerful song that is best enjoyed live and sang at the top of your lungs. The whole Student Central was chiming in right from the start and everyone sang their hearts out to the powerful chorus.

Lonely The Brave wrapped up their amazing gig by performing their breakthrough single ‘Backroads’ as the last song of the night. The place went wild one last time, with guitarist Mark Trotter standing on the edge of the stage singing along the lyrics with the fans. Ross and Andrew going crazy one last time on the guitar and bass front, the fans cheered and then it was all over.

What a show it has been! It took me a good two days to digest everything that happened that night as it was just so much to take in.

I am beyond pleased with having been to that gig, as I even had the chance to speak to Mark, Ross and Gavin after the show, telling them that they were brilliant and they should never stop doing what they do, as this is it exactly what makes Lonely The Brave worthwhile.

The day the music died ... It has been an entire